On School District Consolidation in Marin

"The courage to be vulnerable is not about winning or losing, it's about the courage to show up when you can't predict or control the outcome." Brené Brown ("Dare to Lead")

The recent talk of exploring ways to create "efficiencies" through school district consolidation in Marin County, has been interesting to watch.  Having now worked in three different California counties, this isn't my first rodeo with this particular subject.  It is, however, my first rodeo in a county where the underlying fiscal structures of the member school districts is so vastly disparate, that what became unbelievably complex and challenging in "efficiency" discussions elsewhere, seems almost simplistic compared to the current Marin conversation.

To illustrate what I believe would be a significant obstacle to conquer before attaining any meaningful level of district consolidation in Marin, I offer the chart below. This information comes from Ed-Data, a publicly accessible education data partnership that collects and compiles a number of mandated reports from school districts and county offices throughout California. In this case we are looking at only one snippet of data for each of Marin’s school districts - unrestricted revenues for the 2017-18 school year (2018-19 data is not yet available). These revenues represent an aggregate number comprised of each school district’s unrestricted revenues from the base allocation (either LCFF or basic aid), State lottery funds and the Education Protection Account (EPA). All districts have this category of revenue, which is probably why Ed-Data posts it for "apples-to-apples" comparison purposes across districts. When Ed-Data divides unrestricted revenues by each district’s average daily attendance (ADA), the resulting number indicates each district’s unrestricted per-ADA revenue. As we can see, the range is quite large ... extending from $8,614/ADA at the bottom of the range (RVSD), to $43,797/ADA at the top of the range (Bolinas-Stinson). 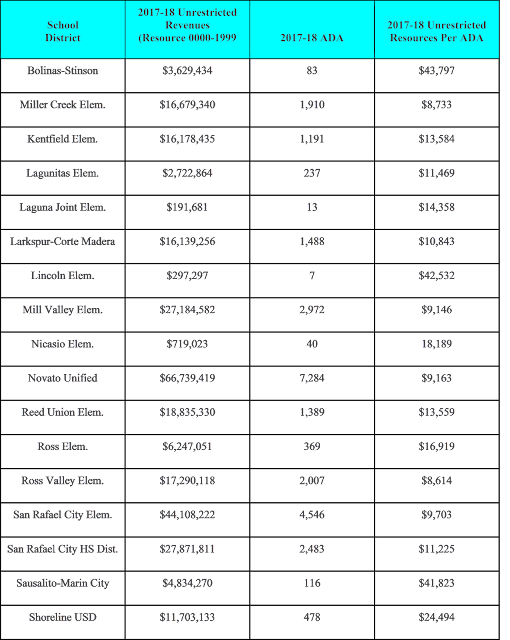 If school districts in Marin were to consolidate, one likely hurdle would be work out the impact of the resulting fiscal disparities that could occur from such consolidation. For example, RVSD's unrestricted per-ADA revenues in 2017-18 were $8,614 and Ross’ were $16,919. If Ross and Ross Valley were to consolidate, there would be a certain, sudden and negative fiscal impact on the per-pupil revenues in Ross. The disparity is even greater if we look at another example, Mill Valley and Sausalito-Marin City.  For Mill Valley the per-ADA unrestricted revenue in 2017-18 was $9,146 and for Sausalito-Marin City it was $41,823.

It should be noted that the data table above does not paint the full picture on what each district actually receives in terms of total per-ADA revenues. Other revenue components not included above include Federal restricted revenues, State restricted revenues and local revenues. These revenue sources can be variable between different types of districts depending upon a multitude of factors, so for comparison purposes they do not necessarily provide as clean a measure. Even so, when you factor the “all in” revenues, the disparities can be even more dramatic. For example, when all revenues (unrestricted and restricted) are taken into consideration, Ed-Data reports Mill Valley’s 2017-18 per-ADA total revenues at $15,384/ADA. For Sausalito-Marin City the total per-ADA revenue was a whopping $50,920.

In counties where all or most of the school districts are similarly base-funded (i.e. through the LCFF), the potential for working-out possible consolidations is perhaps a tiny bit easier due to the fact that the range in per-ADA base revenues is typically more narrow. But in a county like Marin, where we clearly see there are “haves” and “have-nots,” when it comes to base revenues, the range in per-ADA funding creates a problem that may be insurmountable.

What else does the data table above show?

In addition to helping illustrate one of the major complexities involved in school district consolidation within Marin, the above table also dramatically illustrates a fundamental inequity that exists within a relatively small county that served only 33,741 students in 2017-18 (Ed-Data). The disparities we see above, literally impact everything from recruitment and retention of staff to the cost of substitutes and even how much we all pay for county-level special education supports and services. Also, in order for lower base funded Marin districts to keep up with their surrounding highly base funded neighbors, excessive strain and stress must be put on the lower base funded districts' budgets.  This, in turn, can contribute significantly to challenges such as the pattern of deficit spending that a number of districts are now experiencing.

Is there a solution?  Many of us old-timers once thought so.  We believed the landmark 1971 case, Serrano v. Priest, 5 Cal.3d 584 was supposed to settle the issue of gross funding disparities between school districts in California.

In finding for the plaintiffs in Serrano 1971, the judge stated,


"We are called upon to determine whether the California public school financing system, with its substantial dependence on local property taxes and resultant wide disparities in school revenue, violates the equal protection clause of the Fourteenth Amendment. We have determined that this funding scheme invidiously discriminates against the poor because it makes the quality of a child's education a function of the wealth of his parents and neighbors. Recognizing as we must that the right to an education in our public schools is a fundamental interest which cannot be conditioned on wealth, we can discern no compelling state purpose necessitating the present method of financing. We have concluded, therefore, that such a system cannot withstand constitutional challenge and must fall before the equal protection clause."

It’s been almost fifty years since that decision was handed down, yet the “disparities in school revenues” are alive and well, right here in Marin.