Focus on the Process Rather Than the Result

"The best competition I have is against myself to become better."  John Wooden

I am fortunate to have attended UCLA during Coach John Wooden's final years as perhaps the greatest basketball coach of all time and some might argue, the greatest coach ever.  Coach Wooden and his amazingly talented team of athletes won an astounding ten NCAA titles between 1963 and 1975, competing against equally amazing and talented athletes from every corner of our country.  Competitive as Coach Wooden's teams were, including their complete seven-year dominance of the NCAA between 1967 and 1973, the final score was not John Wooden's focus.  In fact, he wrote,


"Competitiveness must be focused exclusively on the process of what you are doing rather than the result of that effort (the so-called winning or losing).  Otherwise you may lose self-control and become tight emotionally, mentally and physically.  I think someone who is too competitive as an individual is overly worried about the final score.  Therefore, I never mentioned winning or victory to my players.  I never referred to "beating" an opponent.  Instead, I constantly urged for them to strive for the self-satisfaction that always comes from knowing you did the best you could to become the best of which you are capable.  That's what I wanted: the total effort.  That was the measurement I used, never the final score." (1997, p. 88)

Going after "the total effort" as opposed to the final score, is wise beyond words.  It applies equally well to the process of teaching and learning as it does to playing basketball, perhaps even more so.

In education these days, I think it is easy for us to focus more on the final score than the total effort.  Listen carefully here ... I am not suggesting in any way, shape or form that summative assessments shouldn't matter ... they very much do.  But FOCUSING primarily on them misses the forest for the trees.

Dr. John Hattie (Professor and Director of the Melbourne Education Research Institute at the University of Melbourne) asserts that our focus for every student should always be to achieve one year of growth for one year of time.  In other words, if we focus our total effort on the process of maximizing impact in the classroom, every student, no matter where he or she starts from, has the potential to achieve one year of growth in one academic year.

So, you might wonder, what factors have impact?  Great question.  It's a little complicated but to understand impact we need to understand something called "effect size" a quantitative measure of the magnitude of a phenomenon.  In Hattie's 2008 book, Visible Learning," he determines that an effect size of 0.4 is the statistical magnitude equivalent to one year of growth in one year of time.  If numbers and stats are not your hobby or profession, no worries ... just remember that 0.4 or greater is the effect size we want.  Effect sizes greater than 0.4 are golden nuggets and those below 0.15 are basically, according to some pretty extensive research, not worth the effort.  The chart below gives you a sense of how effect sizes work in regard to the various influences on student achievement. 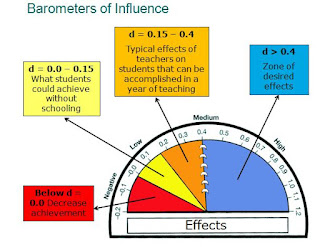 Now that we understand effect size, let's look at what influences educational outcomes the most and the least.  According to Hattie's exhaustive analysis of education research, here are a few of the items that have significant impact.  Remember 0.4 equals one year of growth for one year of time ...
And here is a sampling of items having the least impact according to educational research ...
Each year the list of influences identified in Hattie's research is published.  The effect sizes above are taken from the November 2017 edition of 250+ influences on student achievement.

What does it mean to be a learner in the Ross Valley School District?  It means our total effort must be focused on those known influences that provide the greatest impact, in pursuit of at least one year of growth for one year's time.  That is my expectation as Superintendent and why we ignore those influences that are known to be inefficient, ineffective and therefore not part of the genuine education we deliver at Brookside, Hidden Valley, Manor, Wade Thomas and White Hill.

I share Coach Wooden's enthusiasm for placing focus on the process, because that is what leads to real growth for every student ... the final score takes care of itself.